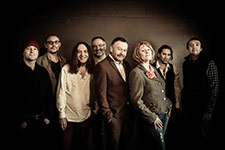 Founded in their native North West of England, Merry Hell is an eight-piece folk-rock band with a history, a pedigree and a bright future. The band has an enviable reputation for the quality of their song writing, recorded work and live performances.The band was forged in the smouldering embers of 90s Folk/punk band, The Tansads. Following an emotional series of reunion concerts in 2010, its members chose to tread the boards under a new name, ‘Merry Hell’, in order to reflect their new impetus, new hopes and, most importantly, new songs. Known for their energy and sheer raw talent, we’re delighted that Merry Hell will make their maiden performance at Ely Folk Festival this year on Friday evening in marque 1.